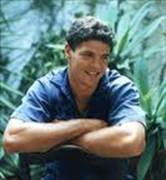 Matt is the author of the hugely popular Dougal stories - Dougal the Garbage Dump Bear and Dougal and Bumble and the Long Walk Home.

Dougal came to Matt after he saw a pair of legs sticking out of the rest of the rubbish at the tip one day.  Matt decided to save him and after finding a few other stuffed toys, had a moment of inspiration and began to write a children's book.  Matt decided to use photographs for the illustrations so he armed himself with a camera and set out to document Dougal's life.  The stories centre around Dougal the teddy bear who, along with his best friend Bumble, are rescued from the tip and embark on a series of adventures including a trip to the pub for a few ginger beers!

Dougal's adventures have been published in Australia and the United States and there are plans for more instalments of Dougal's exciting adventures in the future.

Matt's school visits consist of a one hour presentation comprising the following elements:

Please ensure that a staff member experienced with PowerPoint, lap top and projector is on hand to assist Matt at the commencement of and during his session.