After completing a teaching degree, Deb went to Africa where she was caught in a desert sandstorm, harassed by monkeys and thrown in jail…twice! She produced and wrote a national kids’ TV show before leaving to become an award-winning, internationally published author. Her books include the Max Remy Superspy series and her best-selling, climate change trilogy, Grimsdon, New City and Final Storm. Teresa A New Australian was inspired by her dad, who, with a million other refugees, made the journey to Australia after surviving WW2. The Stupendously Spectacular Spelling Bee and The Most Marvellous Spelling Bee Mystery, are about a shy girl whose family encourage her to overcome her fears and was inspired by Deb’s stupendous grade 4 teacher. Her picture books are Wolfie, An Unlikely Hero and the CBCA Notable, Bear in Space. The Book of Wondrous Possibilities is her love letter to booksellers, libraries and librarians everywhere.

Deb’s presentations are informative, interactive and fun. As a trained teacher, she loves leading author talks and writing workshops for the reluctant writer to the gifted and talented. She also presents at conferences and staff development days, sharing ideas on activities to get kids excited about writing.

Deb’s won awards for her books, but mostly hopes to be as brave as her characters. 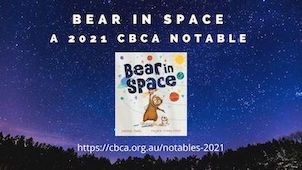 Her latest books are:

The Book of Wondrous Possibilities

Arlo Goodman lives with his Uncle Avery in a run-down flat above their bookshop. He has no friends, except for his pet mouse, Herbert.   But when a girl called Lisette bursts into the shop and begs him to hide her from a murderer, Arlo’s life changes forever.
He’s swept up into an adventure involving kidnappers, car chases and a story in The Book of Wondrous Possibilities, where Arlo and his skymouse battle dragons. But can Arlo find the courage to battle an even greater enemy, who threatens to destroy everything he loves?

The Book of Wondrous Possibilities is a magical story within a story tribute to the wondrous possibilities of books, bookshops, libraries and librarians and their amazing ability to save us when we feel lost.’ Rachel Hind, Librarian, TwoHoots.reviews

Bear was different. When he dreams of going into space, the other bears laugh. In space he feels at home, but also alone, until something extraordinary happens.

A story about being different and finding friendship in the most unusual places.

When Deb saw a small sketch scribbled in Marjorie's notebook, she asked if she could write his story. When she did, Marjorie had chills and said, 'You've written about my son.' Thus began a collaborative effort to bring Bear’s story to life.

The  third and final book in Deborah's cranky climate series was released in 2019.  Deb’s frustration with governments not doing enough to address climate change, led to her bestselling novel, Grimsdon. After being harassed by kids to know more, she wrote New City and with even more harassment, she created Final Storm. There's a new bad guy and an old bad guy, the return of the sea monster, hoverboards, robots and a terrifying decision Griffin must face if he is to save his best friend, Isabella Charm.

The Most Marvellous Spelling Bee Mystery

Just when India Wimple’s life is returning to normal after winning THE STUPENDOUSLY SPECTACULAR SPELLING BEE, she’s invited to London for an international spelling showdown. But how can she go without her family? The Yungabilla community might have a solution! In London, India is reunited with her friends Rajish and Summer. They meet new spellers, and are invited to Buckingham Palace to meet the Queen. But there is skulduggery afoot, with a series of mysterious mishaps. There is even talk of cancelling the competition altogether. India and her friends are determined to find out who the culprit is and get the spelling bee back on track. There are words to be spelled, nerves to be overcome, and a champion to be found!

Inspired by a true story, Teresa was only four-years-old when the bombs began to fall on her beloved home of Malta. Over the next three years it would become the most heavily bombed place of WW2. With her country destroyed and starvation rife, Teresa’s father decides to leave for Australia, to its promise of jobs, wealth and a brighter future.

Deborah’s Talks and Workshops for Kids

Deborah's author talks are informative, interactive and fun. With her teaching and TV background, she uses images, videos, storytelling and games, to explain the writing process and help kids develop their own engaging stories, leaving them excited about books, reading and writing.

Have you always loved writing? Do you enjoy inventing exciting characters and plots? Do you have great ideas but sometimes get stuck? Join Deborah Abela, author of over 20 novels, as she takes you through a series of fun activities to help you become a better writer. You will explore the writing process from developing ideas, to planning outlines and, most importantly, creating characters and plots readers will love.

Fun Activities to Get Kids Writing

As an author and trained teacher who has been speaking in schools for over 12 years, Deborah Abela, will show you a series of challenging, fun and practical activities to get your kids excited about writing. Deb will address the 3 main interrelated strands of the National Curriculum: language, literature and literacy, so that students will gain a better understanding of how writers use language to create exciting plots and characters, all while experimenting with their own ideas and stories. The sessions includes a 20-page handout brimming with ideas to use in class.

'The prime function of the children's book writer is to write a book that is so absorbing, exciting, funny, fast and beautiful that the child will fall in love with it.’ Roald Dahl

Writing for children can be fun and rewarding. Join children’s author, Deborah Abela, author of over 20 novels, as she takes you through a practical, hands-on day of writing activities to hone the skills you need to write for kids. She will also talk about the kids' publishing world and offer advice on approaching a publisher. Deborah loves what she does and is keen to share her experiences and insights into this specialised and incredibly exciting profession.

Wowing Them in Schools

Author and illustrator talks need to be stimulating and thought provoking, leaving students and teachers with new insights and inspiration for books, reading and writing. In this workshop you will be given some practical ideas for presenting talks and writing workshops from Deb Abela, a trained teacher and author who has visited hundreds of schools. Deb will discuss many aspects involved in a school visit, from different types of presentations to classroom management techniques, to make sure you have a successful visit.

What you can expect from a Deborah Abela visit

Deborah likes her sessions with students to be fun, informative and interactive. She tells stories that inspired her work, such as the time she was thrown in jail at gunpoint in Africa. She takes students through the process of creating an engaging story by asking them to come up with story alternatives to her work. Through story and word games, Deb stimulates their imaginations and encourages a love of reading and books.

Deborah also loves leading writing workshops. With her teacher trained background, she uses games to help kids create ideas for their stories and assists them in developing them further to include an enticing beginning, middle and satisfying end, keeping in mind the structure of the 3 Act Plot.

With her background as a television producer and writer, Deb is happy to show some excerpts from the children’s TV show she wrote and produced for 7 years at Network TEN. She explains the process of taking a small idea to scripting and editing stages.

The aim of any session from Deborah is to leave the kids feeling enthused about stories, those on the library shelves and also the ones they have yet to write themselves.'