Lachlan Creagh is a talented Illustrator, Concept artist and Animator.

He was born in Townsville, Queensland. He studied industrial design for several years at university but realised this career wasn't for him and moved to Canberra where he completed a 1 year post graduate degree in computer animation. He then worked for three years at a video production company working on TVC's and corporate videos.

Lachlan has spent 12 years working full time in the computer games industry in Brisbane and doing part-time freelance work in his spare time. He worked as a 3D artist, Lead artist, Lead Animator, senior animator/concept artist and, most recently, senior concept designer during this time. Lachlan was involved in the formative teams of Auran Games, Evolutions Games and Pandemic Studios Australia.

Lachlan has created animation, concepts and illustration for games on PC, Xbox, Playstation and next generation consoles. He has produced animation for TVC's, theme parks and events, and created concepts and designs for launches, sculptures, floats and displays.

In 2008 he made the decision to pursue a full time career as a freelance illustrator, concept designer and animator. He packed his family up and decided on a sea change to northern NSW near Kingscliff for some beautiful sunsets, fresh air and inspiration. His studio base remains in Brisbane in the inner northern suburb of Paddington.

He lives with his beautiful wife Sarah and 3 cheery young sons who offer him a great source of creative inspiration. 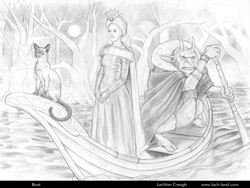